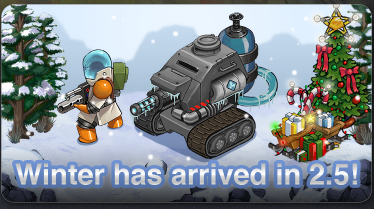 The holidays have arrived at your base! Celebrate with new winter themed missions, decor and units to bring in the New Year, Battle Nations style! Read on for all the details:

Missions: This update delivers new holiday themed missions for you to enjoy! Follow Perkins on his quest to bring Festivus cheer to his friends all over the Frontier. Complete all the new 2.5 missions before the end of the holiday season to earn a special reward!

New Units: There are two brand-new Cryogenic units in this update that use ice to their advantage! Don’t just stun enemy troops, freeze them! Freezing rivals stuns them AND makes them take extra damage!

Bug Fixes: We’ve included many bug fixes in this update including: