NOTE: Guild updates listed below will affect ALL VERSIONS of Battle Nations! Also, players that continue to play on earlier versions will notice that Guild functionality is significantly impacted. Make sure you update as soon as 3.4 goes live!

Silver Wolf Invasion Featuring Guild Competition: Compete with other Guilds, as well as your Guildmates, during our upcoming Silver Wolf Invasion. Your Guild could win up to 5,000 Nanopods! The top 20 players in each of the top 5 Guilds will equally split their Guild’s winnings. New Invasion Leaderboards will help you keep track of where your Guild is ranking during the event, as well as where you’re stacking up within your Guild! A few important things to note:

- Invasions eligible for this competition will spawn on your land with special icons. 5 points are awarded for each of these invasions that you successfully defeat! Don’t waste your time defeating these invasions on your friends’ lands, as 0 points will be awarded for these battles.

- In the event that 2 or more Guilds tie, those Guilds will be awarded the same Nanopod prize for that rank.

For example, if my Guild ties for 1st place with another Guild, each of our Guilds will be awarded 5,000 Nanopods. But, that means no 2nd place award; 3rd - 5th will still be awarded. 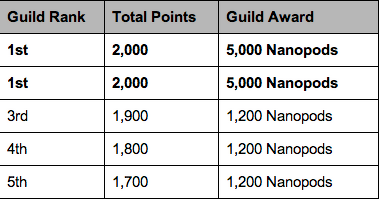 At the opposite extreme, if my Guild ties for 5th with 2 other Guilds, 1st - 4th are awarded as they normally would be and we’d add on 2 additional 1200 Nanopod prizes for 5th place! 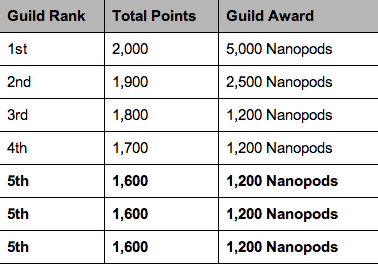 - The top 20 players in each Guild will equally split the Guild’s Nanopod prize. Players must compete to earn the prize. In the off chance that the 20th place is a tie between 2 or more Guildmates, the prize will be split equally amongst everyone including the additional individuals.

- Invasion encounters will spawn for players Level 20 and above.

- Invasion will take place over 72 hours. During that time, similar to Boss Strike events, players will not be able to leave or be kicked from Guilds.

Guild Updates: We’ve made some important updates to how Guilds will work going forward!

All New Guild UI: Viewing information about your Guild and/or specific Guildmates has never been easier! Functionality will depend on your Leadership role. See some examples below! 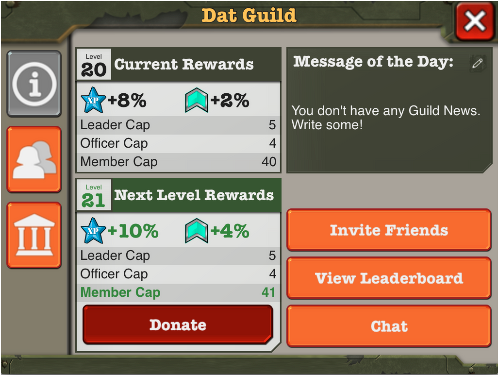 Leadership Roles: There are NEW roles within Guilds!
Guild Leader - This role is the same as it has always been. Leaders have the authority to Promote and Demote, as well as Invite and Kick players. In addition, they may alter the Guild’s announcement, description, tag, and permission settings.
Vice Leader - 2nd in command! Has the same authority as the Leader, only with half the calories! No demoting Leaders and no disbanding of Guilds, though.
Officers - No changes to report. They can Invite and Kick players, and also alter the Guild’s announcements.
Strategists & Operationalists - These roles are similar to Officers, but will have some special privileges granted in future updates! Choose them wisely!
Members - All Guilds are powered by the people! They just have no special privileges. Let them eat cake?


Guild Levels: EVERYTHING IS AWESOME! Everything is cool when you’re part of a team [shameless plug of The Lego Movie, which you should totally go see. #sorrynotsorry]!

80 Guild Levels: Level up your Guild by donating Gold to your Guild Bank. Doing so you will progressively increase the following:
Rewards: Each Guild Level will reward players with higher percentages of XP and SP Bonuses! These bonuses apply to all members of the Guild and are constants. Higher Levels will mean additional openings for you to promote additional Leaders and add new Members.
Caps: We just mentioned “additional openings.” We know what you’re thinking and the answer is “Yes.” From now on, your Guild’s Level will determine the number of Leaders and Members you can have. Caps are enforced for all versions as soon as 3.4 goes live.
“Grandfathered-In” Guilds: All Guilds will begin at Level 1, but “Grandfathered-In” Guilds will be allowed to maintain their current Members, which will inherently exceed the new Member Caps. However, if a Member leaves or is kicked from the Guild once 3.4 goes live, the Guild will NOT be able to add new Members until they reach the appropriate Guild Level. See our Support Article[1] here for details!
Smaller guilds, have no fear! In March you will receive a Boss Strike Points boost! More details to come.

Unit Changes: The Enemy Bigfoot Adult and Enemy Bigfoot Child can now use their rock throwing ability to hit your air units. Unfortunately, given your versions are held in captivity at the Animal Trainer, they do not have these skills.

We’ve taken notice of how committed you are to having dominant Guilds full of kick-ass Guildmates. We’ve invested our time accordingly, and can tell you that this is only the beginning! These Guild changes lay the foundation for even bigger, more exciting improvements, which we’ll be working on and rolling out in our upcoming updates!