85. It was re-released for one day on October 31st for

64 as part of the Breaking Into the Vault! sale.

This unit has two attacks, the first one being Big Bertha, a large missile that can do a lot of damage to a large area if it crits. Unfortunately, this attack has a Prep Time of 1 and a long reload of 7 turns.

The second attack, Stinger Missiles, is a strong attack that will scatter damage all over the battlefield. This attack is a more powerful version of the Hornet's Rocket Volley with a larger target area. This type of attack will usually hit the intended target, but is very unreliable at hitting other targets.

This unit has the Crossover unit type, which allows it to be hit by both Ground and Sea attacks. It also has the LTA type, so it can be hit by Air attacks as well. 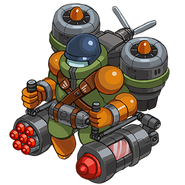