The Anti-Gravity Tank is a promotional unit, that is released along with the 18th Boss Strike for

56 as part of the Breaking Into the Vault! sale.

It has a variety of powerful attacks. Its most powerful and useful attack is its High Velocity Round, which can be used to disrupt large groups of enemies. The second attack, Laser Blast, is a direct attack that hits two adjacent spaces with moderate

-type damage. Its last attack is a checker strike attack, similar to the Imperial Fury's Scatter attack, but with higher damage and a lower crit rate.

The Anti-Gravity Tank can participate in the naval battles because of its "Crossover" unit type, but cannot be used in Ocean battle maps due to its "LTA" unit type.

When an Anti-Gravity Tank is destroyed, it spawns an Aero Jetpack Trooper. The rank of this spawn unit depends on the rank of the destroyed unit (up to Rank 7). 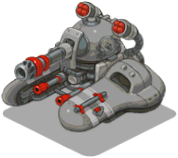 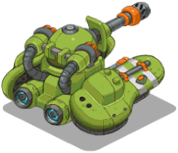