The B10 Wild Boar is an air unit and is the Tier 10 reward of the 5th Boss Strike, Yuzul The Raptor Trainer.

This unit comes with 4 attacks and 3 ability slots at Rank 6. Its 2 Combat Maneuvers attacks are the most powerful attacks.

At Rank 6 the first attack, Armor Piercing Shots, does 82-128 (x4) damage. The second attack, Incendiary Shots, does the same amount of damage but hits up to 3 squares. The highlighted square takes full damage and then it drops off when moving away from the targeted square, similar to the F10's attack except vertical. Both these attacks have high armor piercing and therefore work well against the Ancient Sentinel. The offsets of these attacks are the long cooldown (6 turns) and the preptime (1 turn).

The B10 Wild Boar also has 2 other attacks. An anti-air attack, Aircraft Auto-Attack and a missile attack, Ground Auto-Attack, both with a relatively low damage output of 59-92 at Rank 6. 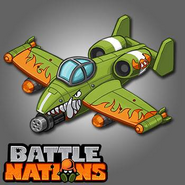