"Designed by animal rights extremists, the BC-1 Snake utilizes armor piercing rounds to destroy tanks while attempting to steer animals to safety. In practice, the resulting stampedes tended to lead to more than a few additional casualties. The Empire bought the entire production run for a song."
— In-game Description

The BC-1 Snake is an air unit and was first available to players as the Tier 7 reward for the 1st Boss Strike, 2nd Lt. Dorian's Assault.

The BC-1 Snake is very effective when fighting Tanks and Vehicles; it has a high damage output, lots of ammunition but a relatively low chance on critical hits.

None of its attacks can target Air Units. 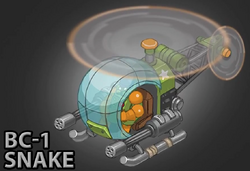 The preview of the BC-1 Snake in the 3.0 Dev Diary video. 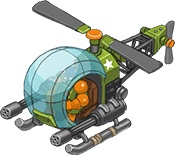