Boss Strike events allow individuals and guilds to battle waves of enemies for rare resources and exclusive units. This type of event was first implemented in the 3.0 Patch. Anyone, regardless of level, can attempt to scale the tiers by engaging in battles and donating resources. These events will last for multiple days. Each Boss Strike event will yield exclusive rewards, including unique Units, Resources and Nanopods. These rewards are offered as prizes as players advance through the tiers by earning Boss Strike points (

Players earn Boss Points in one of two ways:

Players can choose to participate in this event solo or in a Guild.

Below you will find a simple overview of how the Boss Strike system works and what you need to know to successfully participate in it. The official explanation of Boss Strike can be found here.

When a Boss Strike event begins, you will see it appear on the top left part of the screen, directly below the mission icon (

). The timer indicates how much time is left for the event.

Tapping on the Boss Strike icon will take you to the Boss Strike screen. From here, you can read the event's description and check out what each tier has to offer. As an alternative to fighting, you can donate resources to contribute towards a tier. Different resources will be needed for different events.

If you are not in a Guild, the "Join a Guild" button will show up. You can try and solo the Boss Strike event, but it will be very difficult to do so. Being in a Guild is advantageous because everyone's efforts will be pooled together and when a tier is completed, everyone in the Guild is credited. So if you are in a Guild of 15 players and you complete tier 1 for

3,000 Steel, each of the 15 players in your Guild will be credited the reward. You can only earn tier rewards once, with the exception of the Tier 10 rewards.

Selecting the FIGHT! option in the Boss Strike Event screen will start a battle that consists of multiple waves. Battles will be tailored to your level so anyone can participate. The more difficult an enemy is, the more Boss Strike points they will yield when defeated. Any units you lose in battle will be sent to your Hospital/Repair Bay. On the right is an example of what a level 60 encounter may look like.

SP is awarded to all units who participated, as usual, even if the player's army is completely wiped out. Although originally not an intended feature, it was added in the middle of Boss Strike 2. No

SP is earned if an army retreats. 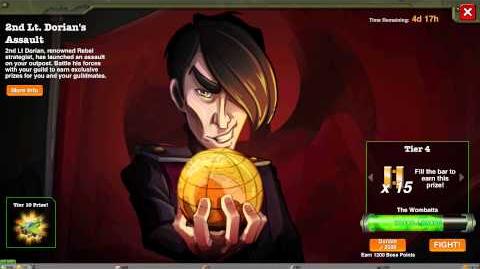 Weight multiplier for Boss Strike points based on amount of Guild members are as follows: