"Slaughter your enemies at the Ceremonial Hearthstone to attract your sweetheart - because nothing says love and devotion like a pulsating heart ripped from a still warm body."
— In-game Description

Players started receiving the mission to build it on February 11, 2014.

The Ceremonial Hearthstone cannot be leveled up.

Stoking the Flames of Love[] 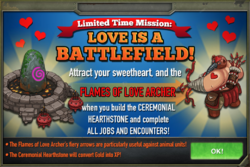