The Falcon's Nest is the Tier 10 prize in the 12th Boss Strike event, the Raider Warlord Challenge.

This unit has immunities against

Cold Environment effects, making this unit quite good in arctic battles. It also has some decent resistance against explosive and cold attacks but it takes extra damage from fire attacks. It has quite low

armor combined, so care should be noted when placing this unit.

The Fire Arrow attack hits three squares with a

Fire DoT for moderate damage, and can hit flying targets. The Cannonball attack targets two squares doing full damage to both squares and splash damage to the neighboring ones. It has enough offense and armor piercing to be effective against infantry and light armor.

It has a low

SP requirement for a tier 10 unit making it easier to rank up to help the player get the most out of this unit in a short time. 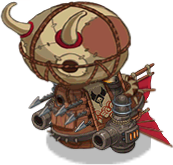 Back.
Community content is available under CC-BY-SA unless otherwise noted.
Advertisement