Jedrek the Crusher was the promotional unit for the 12th Boss Strike, able to be trained at the Barracks for

69. It has a relatively high

resistance. It was re-released for one day on October 30th for

52 as part of the Breaking Into the Vault! sale.

Other than being useful in the 12th Boss Strike, its immunity to

allows it to be a solid unit in the arctic missions. Its high resistances are an added advantage as well, however, its

are its major drawbacks. As an overall unit, it lacks the versatility and damage to be on par with the Legendary Critters, like the Legendary Mammoth and Legendary Raptor, or other powerful promotional units such as the Mechanized Trooper, and so it cannot be classified as a 'must have' unit. It also has low

This unit, alongisde the Junior Officer and any soldier from the Frontier Recruitment HQ, are the only units in Battle Nations with recognizable facial features. 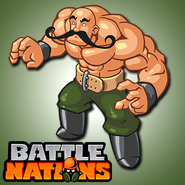