Perkins is a private first class (it is noted early in the game). He is later promoted to specialist. Perkins uses a standard rifle like your average top of the line solider, although his does considerably more damage. He also boasts a tremendous amount of health compared to standard troops. During your battles against Gantas, Perkins even has his own personal Light Tank, though it is much stronger than a normal one (Has the Medium Tank's toughness) but deals similar damage. He also has a Flame Trooper version with his foot soldier's amount of health and zero cooldown. He has shown that he has greatly excelled in his training and has become a skilled and qualified soldier. Even his shooting animation, which previously showed him shooting recklessly, now shows he shoots with confidence and more power, and with better quality (iPad and Mac only). He still loses out to Ramsey and Morgan, though.

The player first meet Perkins as a civilian being trained by Sgt. Ramsey to be a soldier. Ramsey is shocked at how little Perkins knows about weapons training, and offered to help Perkins through a series of missions. Even though Perkins is an important character, Morgan seems to consider him cannon fodder, not really caring what happens to him. Perkins is the one who "volunteers" to go on impossible or just plain suicidal missions. These include things like 'distracting' the massive Bombard cannons, Sandworm bait, and handling dangerous chemicals without protective gear. He is always being dragged along by Lt. Morgan, Floyd, and Ramsey on their own personal missions, and usually gets blamed when something goes wrong. He later works with Percival in exploring new areas such as Ancient Sites.

Later on, Perkins accidentally takes part in the Raider ritual of swallowing the sand worm parasite. He survives, and is celebrated as a hero by them. However, there are side effects, and he starts to behave similar to Crazy Blades. Lt. Morgan approaches him and states that he is acting "useful and enigmatic, if erratic." He then notices "love letters", and follows them to Blade's Base. He then realizes that the notes were not love letters, but pamphlets from Crazy Blades looking for her lost raptor.

Every Christmas, he consistently buys presents for his friends and superiors at the Outpost.

At the end of the mission chain, Perkins finds out who the informant is. Perkins and Floyd then go to Installation 17 but they encountered a Rebel ambush. The Rebels used the battle as a smokescreen to abduct Perkins and there is no mission afterwards.

He seems to be ignorant or even downright stupid at times, causing Morgan and Ramsey to be mad at him. He seems to be timid and is always wary of his superiors' (mainly Lt. Morgan's) commands, although he always seems ready to please his superiors. Lt. Morgan is strongly against him using puns, and when he uses one, he is reprimanded. Lt. Morgan considers him incompetent and somewhat lazy (even though this is generally not the case).

He also has a Raider Warrior mode, but it's just a cover.

"What did you learn today?" -Sgt. Ramsey

"A mortar is not a potato gun." -Perkins

"I DID'NT KNOW THIS KIND OF AGONY EXISTED! GOD HELP ME, I DID'NT KNOW!!!" -Perkins after swallowing a Death Pepper. 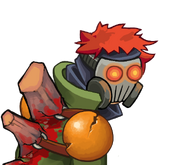