The Signal Jamming Drone is the Tier 10 reward of the 6th Boss Strike, Evaline Acehart's Airstrike.

Its first attack, Grid Lock, hits 9 spaces but can only damage Air units, Vehicles and Tanks. It has a 55% chance to stun targets for 3 turns.

The second attack, Power Failure, targets a single unit dealing a lot of

-damage with 30% armor piercing and a 85% chance to stun the target for 3 turns. The offsets are the prep time of 2 turns and, similar to the first attack, the fact it can only damage Air units, Vehicles and Tanks.

Unlike the previous attacks, the last attack, Sonic Boom, can target any unit. It deals

-damage to a single enemy with no chance to stun.

Roughly speaking, the Signal Jamming Drone is like a flying version of the Boom Bus. 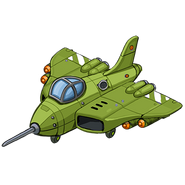