The Silverwolf Crop Buster is the Tier 3 reward of the 7th Boss Strike, Shrow's Revenge and the 13th Boss Strike, Boss Enforcer Shrow's Raid. The Silverwolf Crop Buster, shortened to simply Buster, is a standard fighter with anti-air and anti-ground machine gun attacks. However, it also has an additional crop dust attack which causes fire damage and an extremely high chance to cause Poison DOT. It, like the Chunook, is the allied version of a Silver Wolf air unit. Like the Chunook, it is slightly weaker than the enemy version. This unit, compared to most other Tier 3 prizes, is relatively weak. Its main use will probably be just to serve as an air unit to block critters, however it could see use against Sandworms, since it has fire damage reduction and an immunity to Poison DoT (

), or as an anti-air option since its anti air attack deals decent damage, 3 ammo, and a 1-turn cooldown and 2-turn reload.

The Buster's first attack is a basic anti-air attack that works in the same way as most anti-air attacks from Air units. However, it is slightly weaker. It makes up for it with a 1-turn cooldown and 2-turn reload, so this unit can attack enemy air every other turn. It has 3 ammo, so you won't have to worry much about it running out, and even if it does, the 2-turn reload is not much to worry about.

The second attack is a basic anti-ground attack. However, it is considerably weak and has 1 ammo along with a 5-turn reload. This attack should probably only be used as a last resort.

The third attack is the crop dust attack. It only has a range of 1-4, so it has to be in the 1st or 2nd row to reach the back row of the enemy formation. It deals

-damage, along with a high chance to cause Poison DoT.

All in all, the Crop Buster is not a unit to fear on the battlefield if you're facing it (player or enemy version), though it can see some use, though very rarely. It can be used in PvP to serve as an air unit in the hopes that the other player won't have any anti-air answers, and it can cause decent damage against unarmored ground or air units. 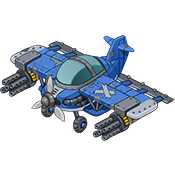 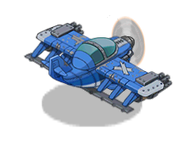