"A biplane fighter named after Charles “Waspkiller” Sopwith, whose illustrious aerial career was ended when his plane mysteriously disappeared during a mass Spiderwasp migration. The Sopwith Spiderwasp is best known for its maneuverability and speed in air to air combat. We recommend avoiding Spiderwasps."
— In-game Description

The Sopwith Spiderwasp has two attacks: one that targets air units and one that targets ground units. It is a basic yet effective fighter: it is good when fighting air and when fighting ground. Luckily, it has a cooldown of 1, but after the ammo is used up, the reload is 6. It can easily kill air to ground planes and it is also effective against infantry. However, it will be easily killed by other fighters and anti-air guns.

Like most every other air unit, the Sopwith Spiderwasp has the added bonus of being immune to many attacks unless they specifically can target air units. Low level players who were fortunate enough to acquire these air units during a Boss Strike can use them as front line buffers against many low level enemy formations that do not have an answer for air units. All air units place in the front row can protect units directly behind it from boars, raptors, and cannot be attacked by spiderwasps. 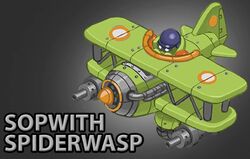 The preview of the Sopwith Spiderwasp in the 3.0 Dev Diary video. 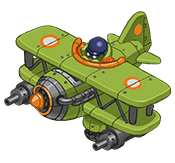