"The Stalker's central nervous system got tired of not contributing to the pain-dealing awesomeness of the sword arm, so it grew tentacles to spew various chemicals for extra effect"
— 3.1 Patch

The Specimen d05 "Apex Stalker" is the strongest Stalker released, and was the Tier 7 reward of the Infected Troops Boss Strike. It comes pre-ranked when you receive it as a reward, and easily tops the amount of health exhibited by other stalkers, making it a lot less fragile.

With three different backslash attacks, the Apex Stalker has a lot of versatility. The Ice Slash and Bolt Slash attacks deal

Stunning, the target(s). The Fire Slash has a 75% chance of inflicting fire 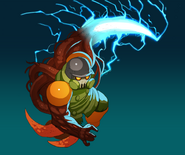