The hit points of the unit, indicated by a green bar as well. HP that is reduced to zero or below will destroy the unit.

The armor points of the unit, if applicable, indicated by a blue bar as well. Armor is the equivalent of extra HP. Damage done to a unit is first applied to Armor before HP, unless the attack is armor piercing, which causes loss to both HP and armor at a rate governed by the armor piercing percentage of that attack.

Bravery measures how well a unit will resist Suppression, a one-round state that reduces the affected unit's Offense. A unit with low Bravery is more likely to be suppressed than a unit with high Bravery. Some attacks, such as melee, have higher chances to cause Suppression.

This value determines how mobile and elusive a unit is. This value is compared against the attacker's Offense to determine the success of the attack. Some attacks will result with a "Miss", or in the case of weapons with multiple hits, not every attack will land.

This is the chance the unit will outright dodge an attack that would normally be successful. This value is not visible to players, but its improvements can be seen with some unit promotions. A successful dodge will reduce damage a significant amount. It is unsure if "Dodge" is still displayed, if for some attacks.

Blocking represents the size and stature of the unit, and how well they will screen for other units placed behind them.

These percentages represent how much damage is reduced to for an attack of that respective type. In some cases, values above 100% is actually a damage increase, representing a unit's weakness. Base Defense damage modification is applied only to damage to HP

For example, "85% Fire" means Fire damage type attacks will only do 85% of its full damage.

These percentages represent how much damage is reduced to for an attack of that respective type. Armor Defense damage modification is applied only to damage to Armor (

The following stats are associated with specific attacks and weapons.

Offense is a measure of a unit's accuracy. The higher it is, the more accurate your unit's attacks are going to be. This is compared against the target's Defense to determine success. Units with weapons that generate multiple attacks (e.g. Shock Troop), will usually have lower-than-average Offense because the number of bullets they put out make up for the reduced accuracy.

Offense is temporarily lowered by Suppression.

Power is amount of enemy HP or Armor reduced with a successful attack. Some weapons deal "splash" damage, which is a fraction of this value. Damage is then further modified by Base Defense or Armor Defense.

Though Power and Damage are practically synonymous, Power could be inherently a unit-specific stat that affects all attacks' Damage value.

Damage Types associated with the attack.

This determines how many rows out the attack can reach. This is measured from the attacker's position on the battlefield, so an attacker placed further back in their own formation will not go as far into the enemy formation.

Some attacks have a minimum rage ("2-"). These units cannot target enemy units directly in front of them, but can still catch them with area-of-effect damage if they can target a space beyond those targets. Be wary of this because some situations can render the unit completely ineffective.

Some attacks have reduced accuracy at longer ranges. This can be seen by the change in color highlighting surrounding targeted units.

Line of Fire determines what the attacker can target with consideration of enemy units. This is of strategic importance. For example, Artillery units with Indirect fire can shoot over enemy tanks to hit the units behind.

This represents a charge up period for certain attacks. The value is the number of rounds needed before the attack can be used. This basically restricts a unit from using the attack during the first few rounds of battle.

Ability cooldown is the number of rounds that need to transpire before the attack can be used again.

Weapons with multiple attacks often have a global cooldown that is applied to the other attacks associated with the weapon. This value is not noted on a unit's in-game profile.

This represents how much ammo is available to a weapon. Some weapons will have multiple attacks, and thus share the same pool of Ammo. Some units will have two different weapons, and thus two separate ammo counts.

How much ammo is expended from ammo when the attack is used.

This value is the number of rounds that need to transpire before the weapon's ammo is replenished. During this time, attacks associated with the weapon cannot be used.

Reload is usually triggered immediately after all ammo is spent. In some cases, the player can manually reload before all ammo is spent by using an attack when there is insufficient ammo. This option is available when the unit has multiple attacks with the same weapon with different ammo used stats.

) directly from the attack. This allows some attacks to destroy units without having to deplete Armor (

Most units have a base critical bonus of 5%, which is the chance that an attack will do critical damage if it hits. When the base crit is not 5%, this field is shown to the player, usually when it is 0%.

This crit bonus raises with ranks for a very few units.

If a unit attacks and gets a crit, the damage is doubled.

Some attacks have a higher chance to score critical hits against certain unit types such as Snipers having a high chance to land a critical hit on infantry units.

Most attacks have a chance to cause

Suppression when they hit, based on the damage done. Some attacks have a modifier that is multiplied or added to the damage, for purposes of determining suppression. A multiplier of x0.5 means the attack is less likely to suppress the target, while x1.25 means it is more likely. Attacks that have a x0 multpilier do not cause suppression.

This value corresponds to the number of animations the unit will go through with that single attack. This can be seen with the Trooper's Double Shot attack or the Grenadier's Handful of Grenades attack.

Some attacks can cause a Status Effects. The chance indicates the percent chance of causing said status effect, and the duration is the length of the status effect.

AoE attacks can damage several targets at a time. Blocking units may restrict where the central square of an AoE attack can be placed, but the damage area can still extend past the blocker. (Fixed line-of-sight attacks do not bypass blocking in this way, though.)

Several variations are illustrated below.

Randomized: Chance hit each square in the target area

Stun and DoT chances are reduced in the splash areas of an AoE attack. 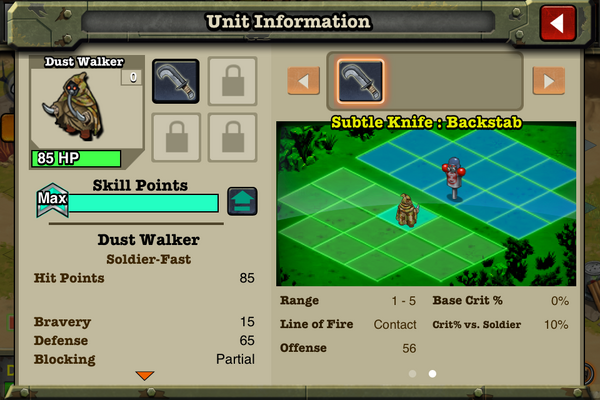 Let's use this Dust Walker as an example.