The Submarine is a premium unit that is released in the 4.5 Patch and can be built at the Dry Dock. Its is one of the few units which are more effective against higher-powered warships than low-level ships, since battleships are vulnerable to

Battleship guns are also less effective against submarines due to the Submarines' explosive damage resistances, although the sheer damage dealt means that battleship guns are still viable anti-submarine weapons.

However, Gunboats, Destroyers will have an easy time destroying them with their Depth Charge attacks, while remaining relatively immune to torpedoes due to their slight damage resistances to them. In addition, torpedoes will often destroy Submarines through the critical bonuses.

One Submarine is rewarded upon completing the mission "Sub Par Sub Repair". 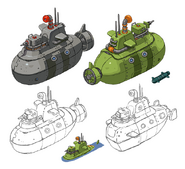