The Infected are a faction added in the 2.3 Patch, 3.1 Patch and 4.1.1 Patch. They are basically "zombies" in theme, though Floyd denies that the zombie label is appropriate. The infected were a ghastly experiment by the Empire to extend the use of Nanopods by breaking them apart, cutting them with sawdust, and using them to heal wounded soldiers. The end result introduced the Infected and the Black Nanopods into the world. Essentially the Infected are mutated soldiers who went under Empirical experimentation with Black Nanopods, that depleted the amount of Serotonin in their brains, which made them super aggressive.

Those who are not squeamish about permanently sacrificing troops can turn normal, non-Nanopod soldiers who are in the Hospital into Infected using a Infection Test Facility. The transformations cost

The Infected generally come in four tiers: Proto-Infected, regular Infected, Advanced Infected, and Archetype Infected (from weakest to strongest). Colossi instead have 2 forms, Archetype and regular. Players can only acquire the no-prefix version Colossus. Higher-tier Infected of the same base type will have the same attack options, but have better stats and damage output. Enemy Infected usually have different stats from the player-controllable versions, sometimes stronger, sometimes weaker.

The 2.3 Patch (October 2012) introduced five types of Infected units. It also featured their enemy counterparts in encounters on the World Map and at the Outpost (limited to the duration of the Infected Outbreak).

During the Infected Troops Boss Strike, subsequently, three more Infected units were introduced as Boss Strike rewards. These so-called Apex Infected are much stronger than (even) the Archetype Infected:

The Infected Boss Strike itself consisted of multiple waves of enemy Infected units scaled to each player's level. This was the only Boss Strike in which a 4th unit (a regular Colossus) was a Tier reward. The deployment limit was also raised from 3 to 4 Infected units per battle.

During the second Infected Troops Boss Strike, subsequently, 1 more Infected units was introduced as a Boss Strike reward, along with the previously released Apex Infected:

The Infected are Imperial soldiers who were subjected to medical experiments involving modified Nanopods. Whereas normal Nanopods can be quite useful for healing the wounded, the modified Black Nanopods instead mutated the subjects, causing extensive physical alterations as well as aggression-inducing brain damage. The medical experiments on wounded Soldiers were presumably first performed by the Empire in a location called the Frozen Wastelands. Floyd describes the experiments as "a saving measure of the empire that has gone horribly wrong", Ramsey replies with "...or a program to create imperial super soldiers, that was a little bit wrong".

When Recoil Ridge comes under attack by the Infected, Lt. Morgan and Ramsey go down to help Sheriff Colt fend them off. When they engage the invading Infected, they encounter the Zombie Hunter, who helps Morgan and Ramsey wipe out the enraged monstrosities.

The annual release (and re-release) of the Infected units is paired with invading Infected encounters on the World Map and the Outpost.

The encounters can be defeated for

Skill Points and a chance of

Black Nanopods. During these events, there are also several recurring Infected missions, as well as a few limited-time decorations that can be build to "attract" more Infected encounters.

So far, there have been 4 Infected Outbreaks:

The following buildings and decorations are associated with the Infected:

The following locations are associated with the Infected:

Image displayed in the info section of the Infection Test Facility. 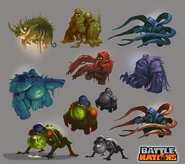 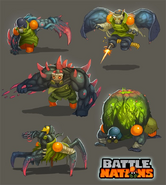