"Like a mosquito, this scout plane can swoop in, hit enemies before they know it's there, and vanish. Unlike a mosquito, it can drop flares to summon devastation like unto the fury of the Lord."
— In-game Description

The Thundercloud F10 is an air unit and was first available to players as the Tier 3 Boss Strike reward during Boss Enforcer Shrow's Raid, the Tier 7 reward during Evaline Acehart's Revenge, and a reward in the second arena challenge for the 10th through 500th ranking guilds.

This unit is more of an anti-ground plane, as its Fly-By is different from the other air units, attacking horizontally across the playing field rather than vertically. This attack, unlike its kin is more accurate and more reliable for anti-infantry prowess, especially since the damage is not spread out randomly. However, the way the damage is dealt is not intuitive - the F10 targets a 5-space wide row, one target at a time, dealing less damage as it progresses. This means that the target under the targeting crosshairs will actually take less damage then the target to its immediate left (or "right" of the player army's facing). Careful consideration is needed to make the most use of this powerful attack.

The F10's other ground-based attack is the Air Raid, which targets the entire enemy battlefield in a checker pattern. The targets will take the full brunt of the attack, but targets in the "splash" spaces will only potentially suffer two 20% hits. This attack with a preparation time and lengthy cooldown is best used to soften the enemy forces or finish off large numbers of low-health units.

The Thundercloud F10 is also equipped with an anti-air attack, dealing moderate damage to a single target.

Given the F10's limited ammo and lengthy cooldowns, it performs best as a support unit. It is a versatile type, given its decent ground attack capabilities coupled with reasonable anti-air defenses and the fact it is relatively durable. 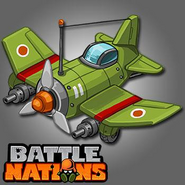