Troopers compose the bulk of the Imperial Army’s front-line forces. Operating under the motto of “First in, Rarely Return,” what these fresh recruits lack in experience and survivability, they make up for with a complete lack of independent thinking, and near-fanatical devotion to the Emperor. Their ability to stop bullets before they hit more important units is also a plus. Some consider their bodies to be better shields than Riot Trooper shields!

Despite the Empire’s recent advancements in weaponry, Troopers are issued the venerable M-11 Battle Rifle. Although critics point to its low rate of fire, Troopers love the M-11 because of its rugged reliability, and because its semi-automatic fire is more accurate at long range than rifles with burst and automatic modes.

The Trooper is the basic infantry unit of the game, and will be a fixture in any army for a while. Troopers are the first unit players can, and will, train.

Troopers are a staple for even high level armies in Battle Nations. They upgrade extremely quickly and cost very little resources to produce, even at early levels. They can be ranked up quickly by fighting in the Boar Badlands or raiding other players. The range of their attack allows them to placed up front to shoot into enemy lines, or fall in behind blocking units, such as tanks.

At Rank 4, the Trooper's damage output increases drastically with after the Double Shot is researched. This attack allows the Trooper to effectively double their damage output in a single turn, albeit at reduced accuracy and double the ammo cost. Against troopers of comparative rank, one shot often deflects.

Like most other Soldier units, they have reasonably decent defense against most attacks, especially after a few ranks of promotions, but they will still fall to a single tank round that finds its mark. Their ammunition capacity is also fairly limited, though offset partially by its low reload time.

While they might not see much use during later missions or high level encounters, Troopers make for great strategic occupiers and raiders against other players' outpost. Against undefended resource nodes and buildings, a handful of these are enough to take out the default militia defenders, and Troopers are extremely cheap and quick to heal in the even that the occupying forces are forcibly removed. A novice player can easily create or heal a few hundred troopers in days.

It is worth noting that when a player invades another player's outpost and targets an undefended area, the game will note that the defenders are "Militia". Defending Militia forces will consist of a single Militia and one Trooper. This Trooper is of the same rank as the defending player's Troopers, and equipped with the same attacks. The defending player will not lose anything from this, similar to the arena, unless a garrison or bunker is in the vicinity.

It is also worth noting, from a strategic standpoint, that a R5 trooper can defeat a R3 trooper and one militia in a raid battle. So it is probably worth the bars and nanopods to level up the trooper to R5 and research the double shot attack, so raiding is quicker and less expensive. 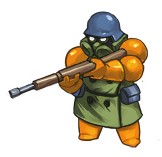 The Trooper as depicted on the former Battle Nations website.