"The UD-4L Gunship may have light armor, but it has to be light because all the weapons are really heavy! Equipped with a Heavy Machine Gun, Rockets, and Missile Launchers."
— In-game Description

The UD-4L Gunship is the Tier 10 reward for the 18th Boss Strike event, Sergeant Ludlow's Revenge. It is a very well-armed but relatively fragile support aircraft.

The first attack, Burst Fire, is quite powerful against both armored and unarmored units. Its armor piercing nature is very useful, although players with the B10 Wild Boar or B10-C Boar II will feel it is not as powerful. Nonetheless, it provides a comparatively good level of damage.

The second attack, Stinger Missiles, is a missile attack that has a random erratic attack pattern. It may not hit the targeted area on rare occasions, and it may not hit at full power. However, when all the rockets hit the target, the damage is substantial (able to remove the

Armor of a Plasma Tank or destroy most light/medium armored vehicles).

The last attack, also called Stinger Missiles, strikes in a 2-row checkered pattern. It is able to hit multiple units consistently and does low to medium damage. Both the second and this attack are useful at stripping

This is a unit best employed in a supporting role in conjunction with other units, since all attacks have long cooldown and reload times. However, it can operate on its own merits as well, due to the sheer destruction it can deliver. The unit is somewhat fragile, but as it is armored, it can take a few hits. This is a unit well worth the effort necessary, and should be regarded as a priority target when it appears. Another note whilst facing this unit is it's rather high offense on each of it's attacks. 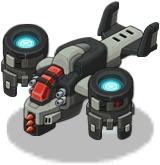