The V-14 Maverick was the Tier 10 reward for the first Boss Strike event, 2nd Lt. Dorian's Assault, and the Tier 3 reward for the eleventh Boss Strike, Evaline Acehart's Revenge. Players could vote on the Battle Nations Facebook page for the Tier rewards of Boss Strike 11, being able to choose from pre-selected rewards from previous Boss Strikes. It is a maneuverable, yet heavily armored air unit.

The V-14 Maverick is equipped with machine guns that will strafe ground units. These attacks will shower ground units with

-damage and cause splash damage to adjacent units. Given its piercing nature and lack of any armor piercing, unarmored targets can be potentially ripped to shreds while those with armor will either shrug off the attack or have their armor stripped.

The Low Yo-Yo attack is the Maverick's anti-air attack, with a single-round cooldown and enough ammo for 3 attacks before it needs to reload. While the two strikes prioritize the selected target, there's still a chance that the attack will strike at an adjacent target and instead catch the original target with minor splash damage. 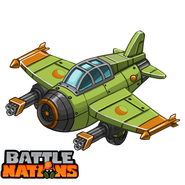