"The Z2-18 Bomber is equipped with high-grade explosives and like, a bunch of machine guns. Just heaps of 'em. All over the place. PEW PEW PEW!"
— In-game Description

The Z2-18 Bomber is an air unit and was first available to players as the Tier 10 Boss Strike reward during Boss Enforcer Shrow's Raid.

The Z2-18 Bomber is an armored aircraft (at higher ranks) equipped with both bomb attacks and machine guns. The bombs will strike at a single ground target and inflict a fire-based damage-over-time. The Machine Guns are for anti-air defense.

The Carpet Bombing attack requires plenty of preparation, but when it is ready, it will target all enemies (total of 6 turns for prep). Unfortunately, this attack has low accuracy and the damage spread is wide, and thus unreliable. Also, after the Bomber's one shot with this attack, there is a lengthy reload time.

Something to note about the Bomber is that after rank 6, the Bomber has 100% chance for critical hits, effectively doubling all its attack damage stats. 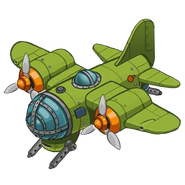